Since 1 February 2010, all windows and entrance door products, falling within the scope of the EN 14351-1 standard, must be CE marked before they go on sale. If the manufacturer wishes to obtain the CE mark, they must have the properties of their products tested at approved institutions.

For all tests, the entrance door is installed in a completely sealed test chamber inside which a negative or positive pressure can be created as necessary.

As a first step, air permeability is tested. The test is performed by timed intervals of gradually increasing the positive and negative pressure inside the chamber, while measuring the air leakage. Air permeability is defined as the amount of air leakage at individual values of positive and negative pressure. When evaluating the results, the size of the front door must be considered - the larger the entry door, the longer the gap between the entrance door leaf and the frame, thus the larger the leakage must be allowed. 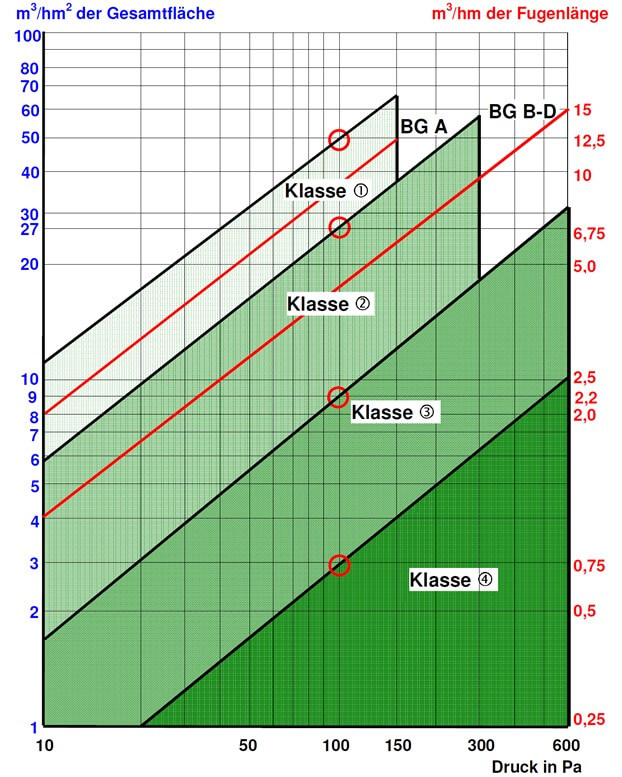 Airtightness testing is followed by the wind load resistance test. The front door is exposed to high positive and negative pressure for a short period of time, followed by 50 cycles of alternating positive and negative pressure loading. The result of the test is the final deformation of the entrance door, which is given by the letters (A, B, C), where the letter C means the smallest deformation and A the largest. The letter is supplemented by a numerical mark from 1 to 5, which represents the amount of pressure with which the entry door was loaded during testing. Each numerical class has prescribed pressure values according to the standard. The final mark is thus a combination of a letter and a number (e.g. C4).

The wind load resistance test is followed by a repeat of the airtightness test. As the exterior door has been permanently deformed at high pressures during the wind load resistance testing, the re-measurement of air permeability must not be impaired by more than 20%. If so, the results of the first air permeability test shall be confirmed as valid. The exterior door can then be classified into the appropriate air permeability class, denoted by numbers from 1 to 4, with 4 representing the best tightness and 1 the worst tightness.

Once all of the above steps have been completed, the water tightness test follows. Water tightness can be tested by two methods - method A or method B. In method A the whole exterior door is sprayed with water, and in method B a canopy is simulated so that the upper gap of the joint between the leaf and the frame is protected from water.

At Pirnar, front doors are always tested according to method A, as this is the more demanding type of test.

Testing begins at normal air pressure and with continuous spraying of the entry door for 15 minutes. This is followed by a gradual increase in pressure (at intervals of 5 minutes) inside the chamber until the first drop of leakage is seen on the inside of the entrance door. The last positive pressure at which the front door did not allow water through for the entire duration of the interval (5 minutes) represents the water tightness class of the exterior door.

Conventional front doors reach classes around 4A (150 Pa), while Pirnar CarbonCore doors with Magnet WeatherSeal reach the highest standard class of 9A (600 Pa). Such a high pressure simulates the rain and wind blowing at a speed of 114 km/h. Despite all this, the entry door still retains perfect water tightness. The high water tightness class has an even higher weight, as it also shows the extremely high structural strength of the front door, as it achieved such a result despite the previous high wind pressures it was subjected to during the wind load resistance testing. There, the door was ranked in the second highest class of C4.

Water tightness testing is followed by a so-called security test, where the door is loaded with extremely high positive and negative pressure for a very short amount of time. During this test the door must not open.

At the end of the test, the final functionality of the door is checked - smooth opening and closing, locking and unlocking.

Are you ready for the front door REVOLUTION?

Download catalogues for the latest and most innovative Pirnar entrances. Browse them together with your loved ones.