HEAVY WITH MEANING AND STYLE

A purple front door can be more than just a reliable door in an unusual colour, as purple is culturally associated with a variety of interesting attributes. Thus, your front door may become an identifying feature not just of your house but of your very identity, as seen through your neighbors' eyes. At Pirnar, you can choose to apply any of the many RAL colours to your door, both on the inside and outside. After all, purple is one of the most unconventional choices available. 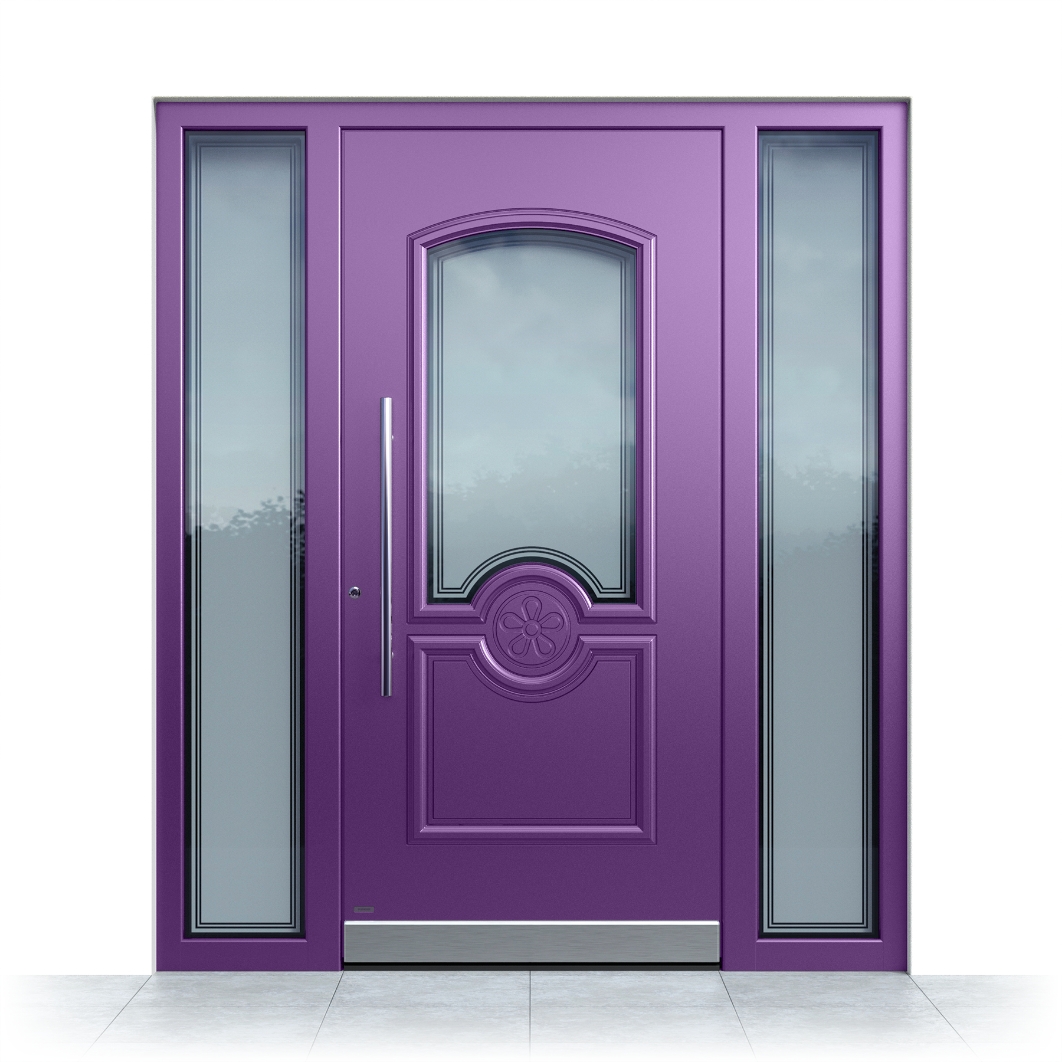 What's the difference between purple and violet?

Purple is a more saturated colour compared to violet. Thus, the latter is often considered to be the more "natural" of the two colours. Some people even consider purple to be garish compared to more subdued hues.

This is also why many people use purple sparingly in the exterior and interior design of their homes. Purple front doors are a perfect way to put a colourful accent on your home, but it may not be the safest choice to paint your entire house. 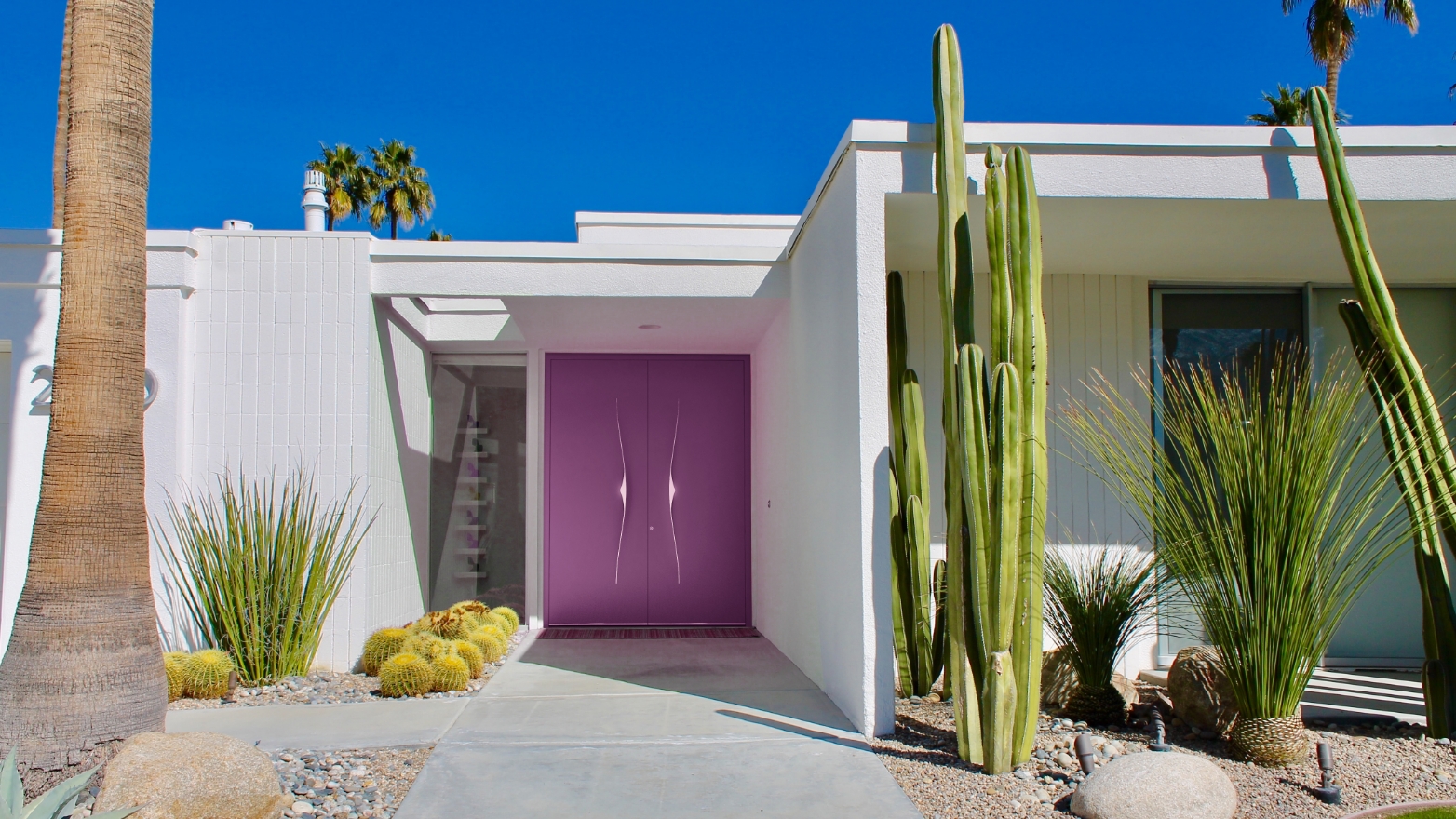 What does a purple front door signify?

The colour purple has historically been associated with a number of different attributes, beliefs, and professions. Naturally, not everyone today will know about these, but your front door may still draw the attention of people in the know. That way, your door may simply be a unique statement of style – or the purple paint may be taken to reflect the character of you and your family.

Whether used in paints or dyes, purple has long been associated with royalty. Many European dynasties have worn royal cloaks or other apparel dyed in purple, often with white accents. Roman Catholic bishops also wear a shade of purple. This is because the pigments have historically been very hard to produce, making the colour particularly costly. Thus, only the most influential and wealthy of individuals were able to procure such items.

Today, this has led to the colour being associated with prosperity. Your door may be taken as a sign of prosperity, or as a signal that you wish prosperity upon your family. 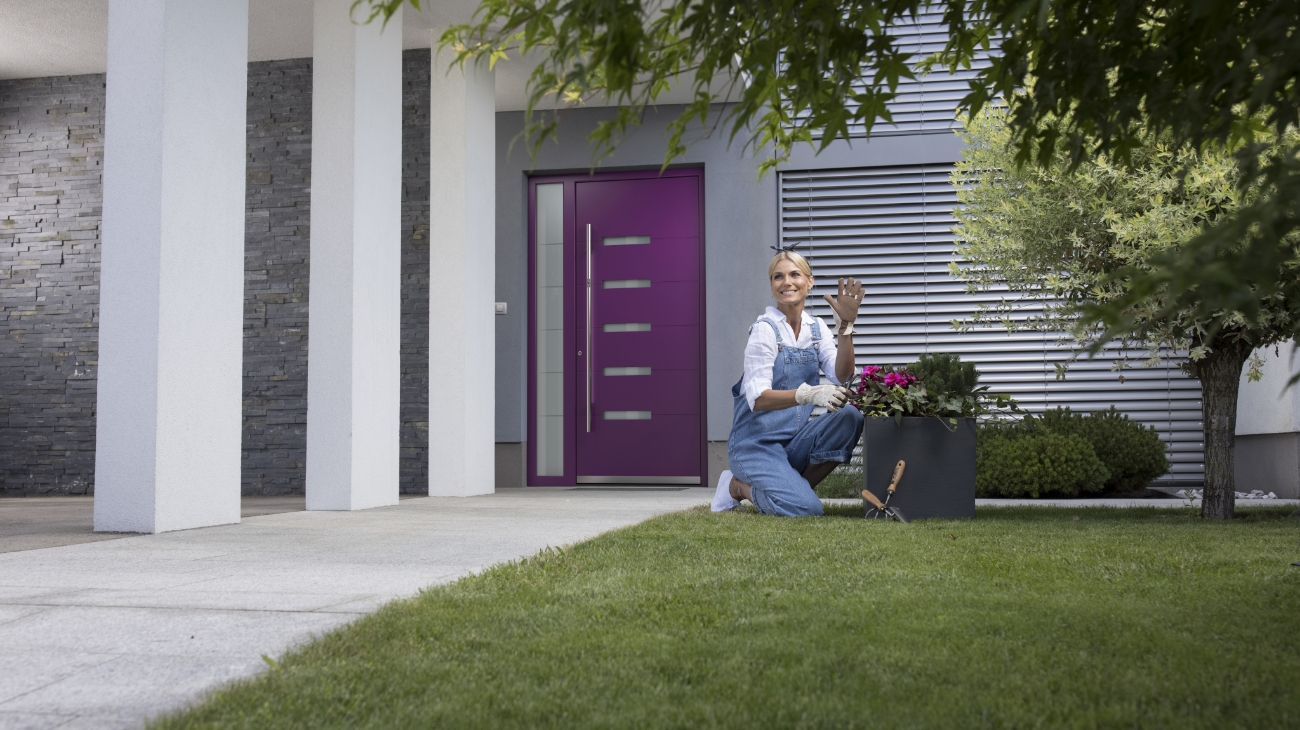 Regarding religions, purple isn't solely used by Roman Catholic bishops – it's considered to be a very spiritual colour in practically all western cultures. That´s why a purple front door may be used as a sign of spirituality, regardless of creed. This association likely also stems from how rare the pigment was historically.

Shades of purple are considered for some to be high-energy colours associated with both fire and ice, as the colour is a mixture of red and blue. Some extreme thoughts suggest using purple hues sparingly in your home. Purple front doors in particular are said are similar to prosperity and wealth, especially when combined with golden or silver accents. Consider combining a deep purple front door leaf with silver or golden frames for maximum effect. 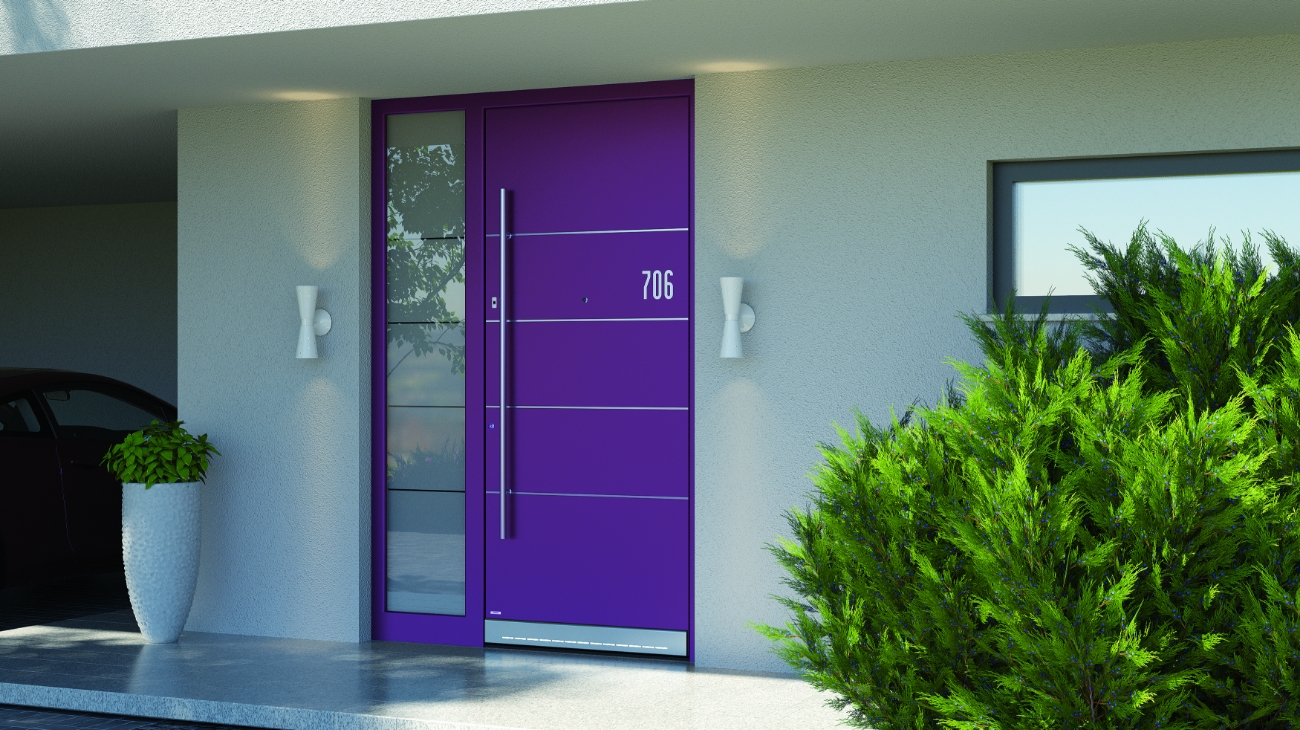 Purple doors are also recorded with pre-Christian traditions. Of particular note, in some cultures, it's said that a purple front door signifies that a spiritually sick person lives in the house.  In villages there were many doctors who enjoyed communicating with all people from the village and they liked to heal them in the marketplace. 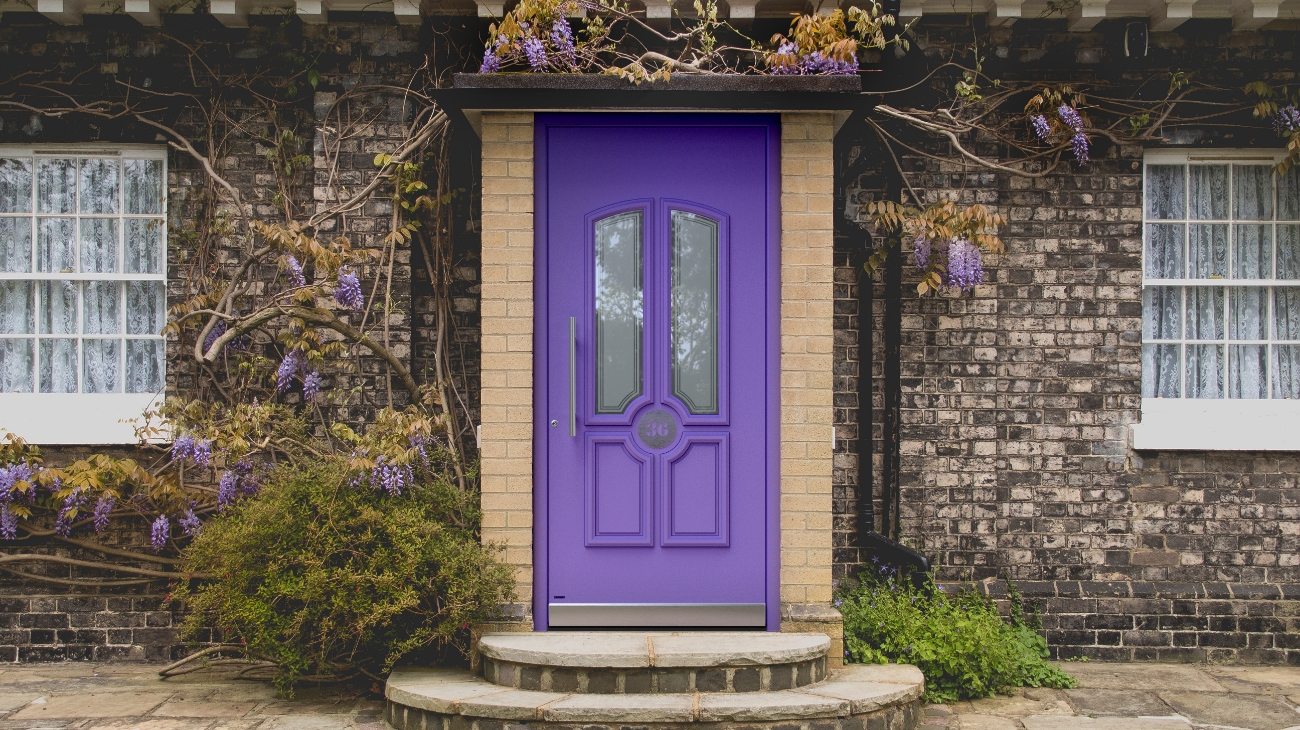 Aside from the deeper meaning of the colour, purple is also a very expressive colour that's simply very unique. The exterior design of most houses relies predominantly on subdued colours such as white, black, or various shades of beige or mauve. Meanwhile, colours such as red, violet and purple inhabit the higher frequencies of the colour spectrum, which makes them stand out wherever they are. It's for just this reason that warning signs predominantly use orange and red – those colours simply stand out immediately.

A purple front door draws the eye, making a great highlight for your house, and an unusual one at that. So even if your neighbors don't know about the associations outlined above, painting your front door purple is certainly a way to catch their eye and display your unique sense of taste. 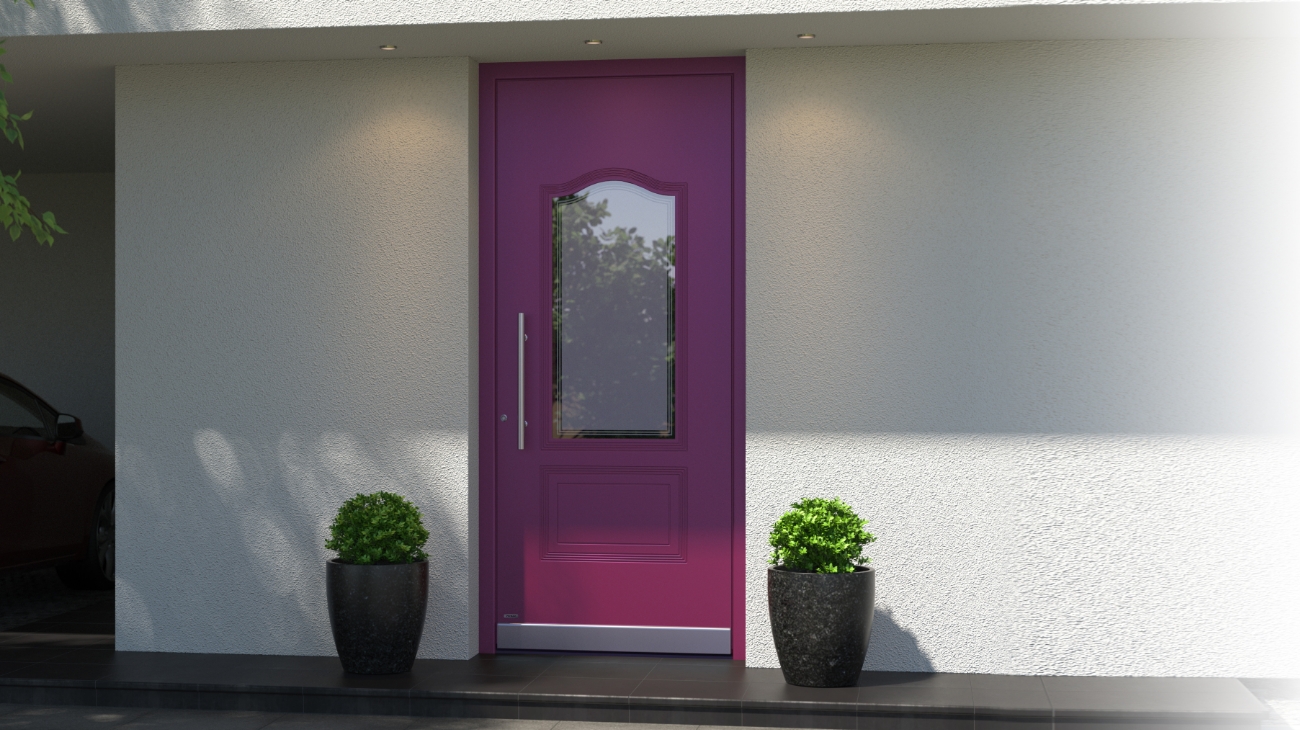 As outlined above, your front door is the perfect place for purple paint, as too much of the highly saturated colour on your home's facade might come off as garish. But you don't need to limit it to the front door only. For example, you may paint your house in white or another more subdued colour, and then add purple highlights – paint your window frames, window sills or even your entire windows purple to match your front door and you've just created a unique look that's not too hard on the eyes.

Aluminium or wooden doors?
At Pirnar, you can choose between aluminium external doors and wooden front doors. Aluminium is highly durable and the purple colour will come through very strongly on the flat surface. Meanwhile, wooden doors lose some of their natural wood-grain aesthetic when you apply paint, but the wood can still be made out under the purple paint.

When choosing materials, it might also be helpful to consider some of the points made about what the colour signifies in different cultures. If you're going for an aesthetic that connects with the spiritual side of the colour, you'll probably want to go for high-quality wood such as oak doors, spruce, or larch.

Create your own design ideas
Using the Pirnar front door configurator, you can easily create the exact look you're going for. The configurator allows you to choose all details for your front door:

You can also add sidelights, transom lights, or panels to your door. So, if you're unsure about getting a purple front door, be at ease: The Pirnar configurator can show you exactly what your door will look like once installed. 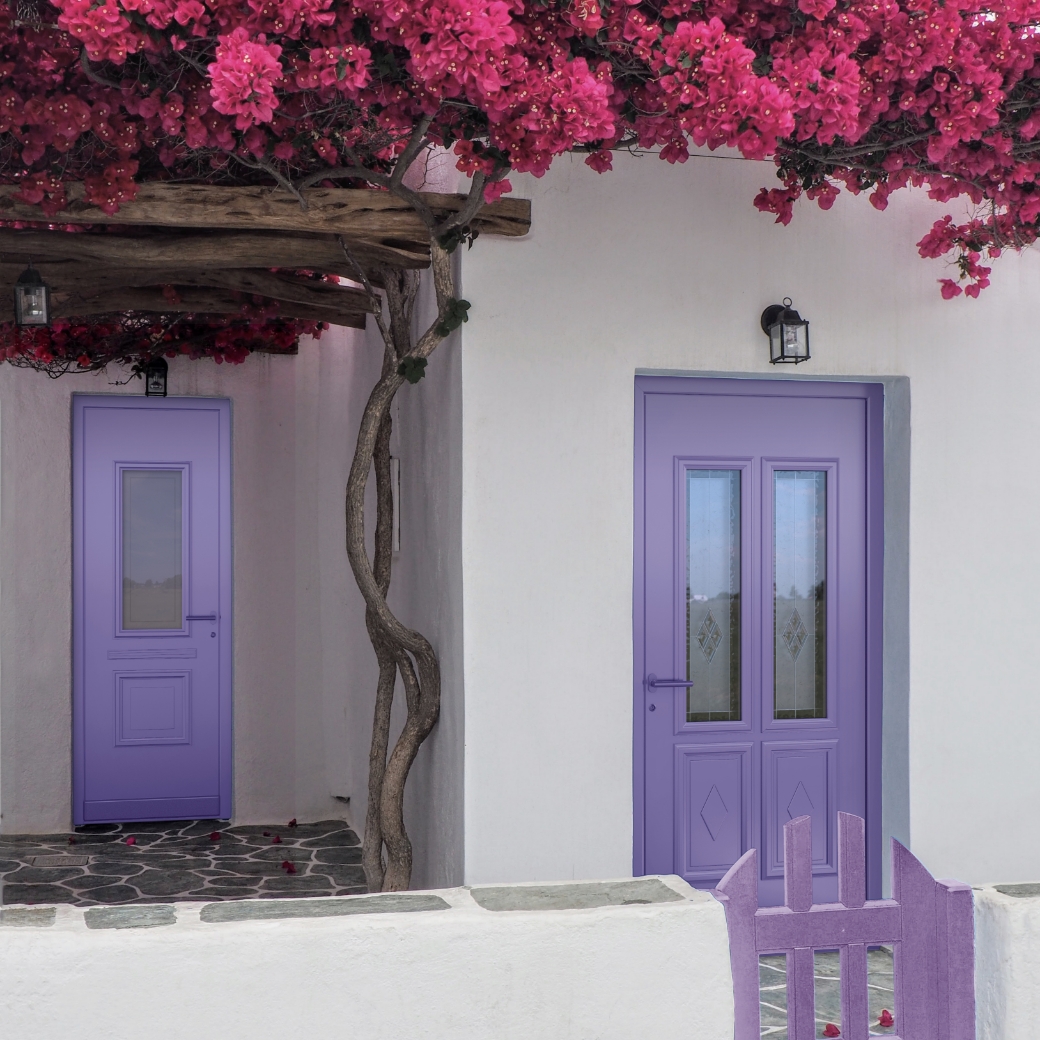